RAKIA AND THE PROPER WAYS TO CONSUME IT

The focus of this article is on rakia (fruit brandy, the national drink of most of the countries on the Balkans) and what the right way to consume it is, especially in terms of temperature, food to be paired with, as aperitif / digestif only or combined with the appropriate for the particular rakia food, seasoning and so on. The goal of this article is to be the basis of a series of articles dedicated to the right consumption of rakia, whose aim would be to contribute to the proper consumption of rakia as well as to impugn some myths, legends and wrong perceptions about its consummation and of course to popularize the right practices of consumption. At the same time, it will bring forward some unknown by a lot of people facts and specifics with regard to this drink.

The focus of this article is on the general aspects of the right consumption of rakia rather than the individual types of rakia separately.

Especially in Bulgaria, in recent history it is widely considered that rakia should be consumed ice cold. We would like to underline that this is absolutely wrong. The consumption of rakia ice cold leads to misbalancing the drink itself. Most of the qualities of rakia would be lost, if it is served ice cold. In some cases only the grape based brandy, and if we have to be concrete, the grape based brandy made of wine byproduct, could be served slightly chilled. Actually, the only “advantage” of serving rakia ice cold would be to conceal some of its potential defects, especially those in the aroma coming from the tail fractions which may have not been properly separated, usually with the goal of producing higher quantity per unit of base product (a kilogram of grape, plum, etc). The best temperature of serving depends a lot on the type of rakia but in general since rakia is a fruit brandy, it is between 14 and 20 degrees. Some longer aged products like for instance 12 year plum are very often served even at 30 degrees.

Another popular perception, especially in Bulgaria, is that rakia, no matter what king, should be drunk alongside with Shopska salad (tomatoes, cucumbers, paprika, onion and Bulgarian white cheese). This is a tradition, which seems to have been pushed forward by the former leading Bulgarian state owned touristic company before 1989. It is also, however, not necessarily the right way. This kind of salad could probably be the right food (mezze) for some grape rakias, although again it highly depends on the specific kind and style of grape rakia. Luckily, rakia is a very complex drink that allows to be consumed along with many different types of food (from salads to dried meat, as well as cooked dishes and even desserts) depending on its type and style. It should be noted that choosing the right food to pair rakia with is crucial. Serving the rakia with the wrong food could absolutely destroy the experience of the person who wanted to enjoy the drink. Generally, good combinations are:

In this context, an instance of a totally wrong combination would be Viljmovka (Williams pear) rakia along with the above mentioned shopska salad.

The right moment to consume rakia also highly depends on the type and style of rakia. There are types of rakia that are most suitable as aperitif. Those are in general raspberry, Viljamovka (Williams pear), sometimes apricot rakia. Others like for example 12 year aged plum, Medovina (a kind of liquor based on rakia with honey), Sour cherry (a kind of liquor) are more suitable to be served as digestif. That of course does not mean that the kinds, and especially some styles of them, suitable as an aperitif or digestif may not be served with food, but it is to indicate that they are generally suitable for that. After all, here we should emphasize once that rakia is the kind of spirit, which is meant to be consumed with food. A very popular tradition or maybe we should say habit of consumption for Bulgaria is to have a rakia with a salad before the main course. While that may result in very nice and memorable moments one should be careful choosing the right combination and beware of the impact of the kind of rakia chosen on the upcoming courses and drinks (like wine or nonalcoholic beverages) in the menu.

There is a common perception, not only in Bulgaria but overall around the world, that the aged (matured in oak) spirits are better than the unaged (fresh) ones. Very often this is true for some kinds of spirits such as whisky and cognac. However, for rakia this statement is far from the truth. The reason is that unlike whisky, whose basis is grain distillate or cognac and armagnac, whose basis is basically distillate from the grape varieties Ugni Blanc or Folle Blanche, the basis for rakia is either a fruit distillate or a distillate from various grape types. Especially in the case of the high quality rakia the fruit is preselected and very carefully cleaned, which in turn makes the qualities and the character of the distillate in terms of aroma and taste far more different and complex than those of let’s say many of the distillates used for the production of whisky. That is why in rakia it could be looked for either the effects from aging or the freshness and complexity in the taste and aroma coming from the base material used as well as the methodology and kind of equipment used in the process of fruit selection, fermentation, distillation and so on.

There are types of rakia, for instance grape and quince, that generally provide great results both aged and unaged (fresh). At the same time plum rakia has a great aging potential and the results of the proper and professional aging are remarkable. That is why almost all of the plum rakia that could be found on the market has been at least for a while aged in oak. Other types of rakia, for instance Viljamovka (Williams pear), gives far better results if it is unaged and in a lot of styles of Viljamovka it is relied exactly on the freshness. Having in mind all mentioned above it is worth noting that the aging process does not necessarily guarantee structure or more value to a spirit. What actually leads to good results is not the aging itself but the professional and well done aging of the distillate but only when it is appropriate.

Very often our team faces some challenges with regard to the people’s perceptions of when rakia should be consumed in terms of seasonality. It turns out that in the mind of many people (in Bulgaria) rakia is a winter drink only, because it is alcohol, which is very often oak matured. At the same time the rest of the people perceive rakia as a completely summer drink, because they associate its consumption with fresh salad. Based on that, I guess you could reach the conclusion on your own that there is no seasonality to rakia consumption. There is a clear and distinct seasonality to the consumption of the different kinds of rakia though. While some types and styles of rakia such as aged plum or aged grape rakia are mostly suitable for the winter season, other kinds and styles of rakia are more autumn / spring and even summer drinks, especially if combined with the right food. Those are, for instance, Viljamovka, apricot and raspberry rakia. A tip from our side – try a gin tonic cocktail, but instead of gin try apricot rakia and add some basil on top. The end result – a fresh summer drink with distinct freshness having apricot, vanilla and coconut aroma and flavour instead of juniper, much longer aftertaste and obviously more complexity.

In that context we should mention the topic of the ever more increasing interest for making cocktails based on rakia. It of course takes some time until the cocktail masters learn what the right way to work with this kind of complex drinks is and get to know its enormous potential for making cocktails. Fortunately, especially in the last couple of years, there are more and more bartenders, mixologists and bar owners who are very excited and focused on working with the jewel of the Balkans. They are starting to realize that instead of for instance searching for quince, and herbal aromas, they can simply use quince rakia, whose main aromas are bourbon geranium, geranium, some spiciness, some oak and much more, which are already perfectly balanced in the drink used as a base.

Our team strongly encourages everybody having an interest in natural, complex, fruit based spirits to try and to explore the enormous and very thrilling world of rakia. Just make sure that you go to experienced local people who are able to properly and successfully take you on a journey through it.

Please follow our website for more articles regarding the proper ways to consume the different types of rakia. Follow us on facebook to stay up to date for the new events that we arganise. You can always contact us on 00359882517935 or office@rakiashop.eu if you need more information regarding any rakia..

We wish you nice time while reading and PLEASE DO consume wine, alcohol and any other alcoholic beverages wisely, in moderation and only for pleasure! Do not underestimate the circumstances, obey the law and never drive after drinking alcohol!!! 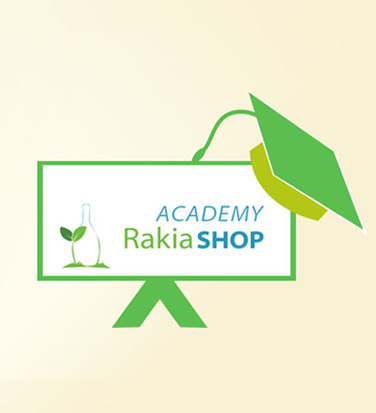